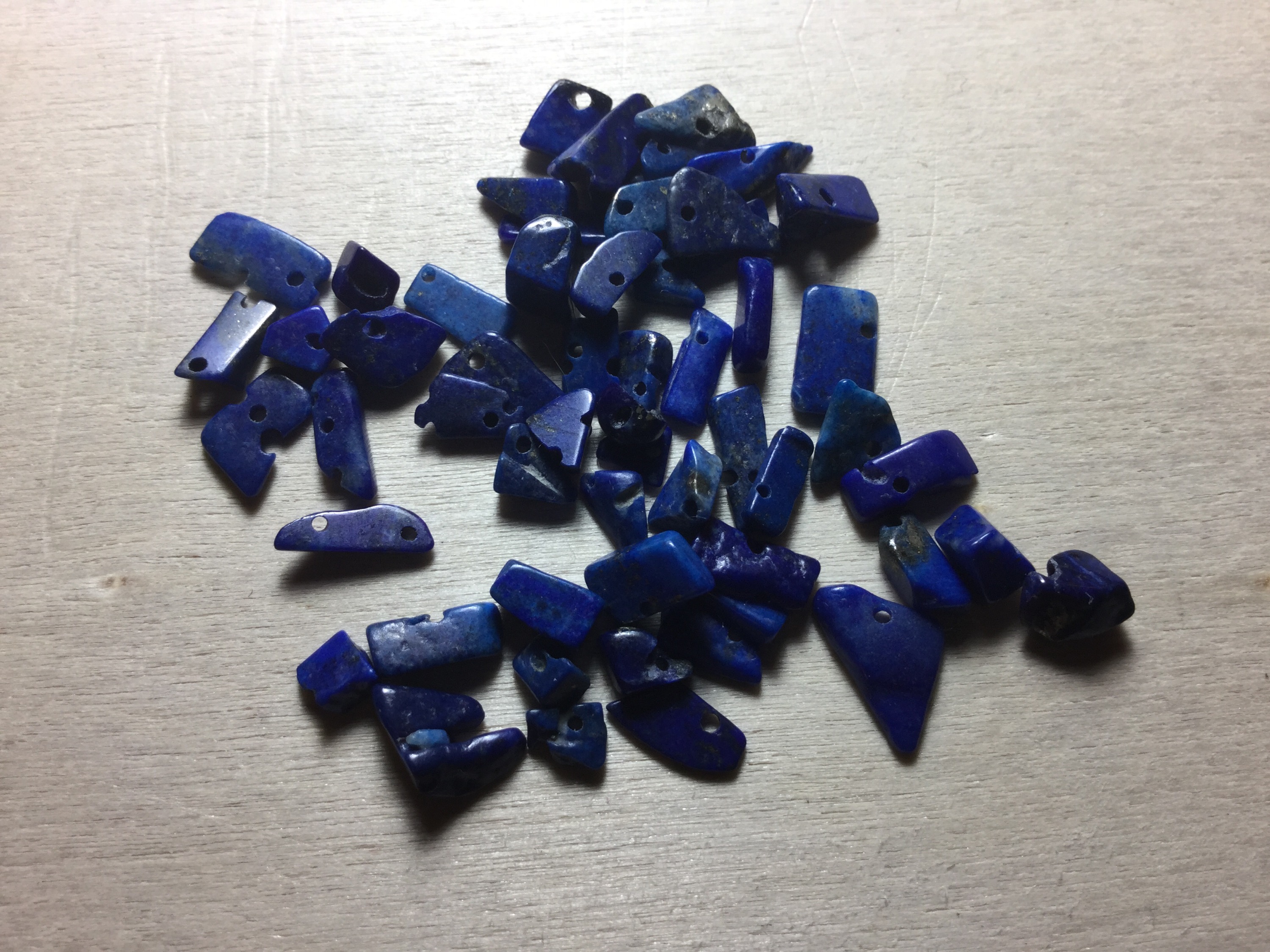 I don’t think this one is going to stay a mystery after the halfway point, but let’s see how it goes.  I have some lapis lazuli chip beads from when I made necklaces from my lampwork.  I’m not doing much jewelry-making recently, and some of those lapis chips were drilled pretty badly (certainly not fit for durable jewelry!), so I’ve decided to cull the bad ones.  Bad beads are those with holes so close to an edge or corner that they’re likely to break during use.  Here’s my pile of bad beads:

You can just barely see the bronz-ey tone of pyrite bits on the edges of some of them.  Too bad they failed as beads (for them, anyway!).  Next step – destroy them.  Someone messed them up, and I’m going to mess them up worse.  Summon the hammer!

I more than doubled the size of the pile of beads by going back through the “good” beads a second time.  I had heard I would lose a lot in the processing, and wanted to make sure I had enough.  I grabbed a flat chunk of metal, a rag, and the beads, placing the rag down first, then the metal, then the beads, then another layer of the rag.  I then whacked everything with a hammer until I had mid-sized granules of lapis, mixed with fine dust, and everything in between.  It was now that I began to notice the sulphurous odour of the lapis. 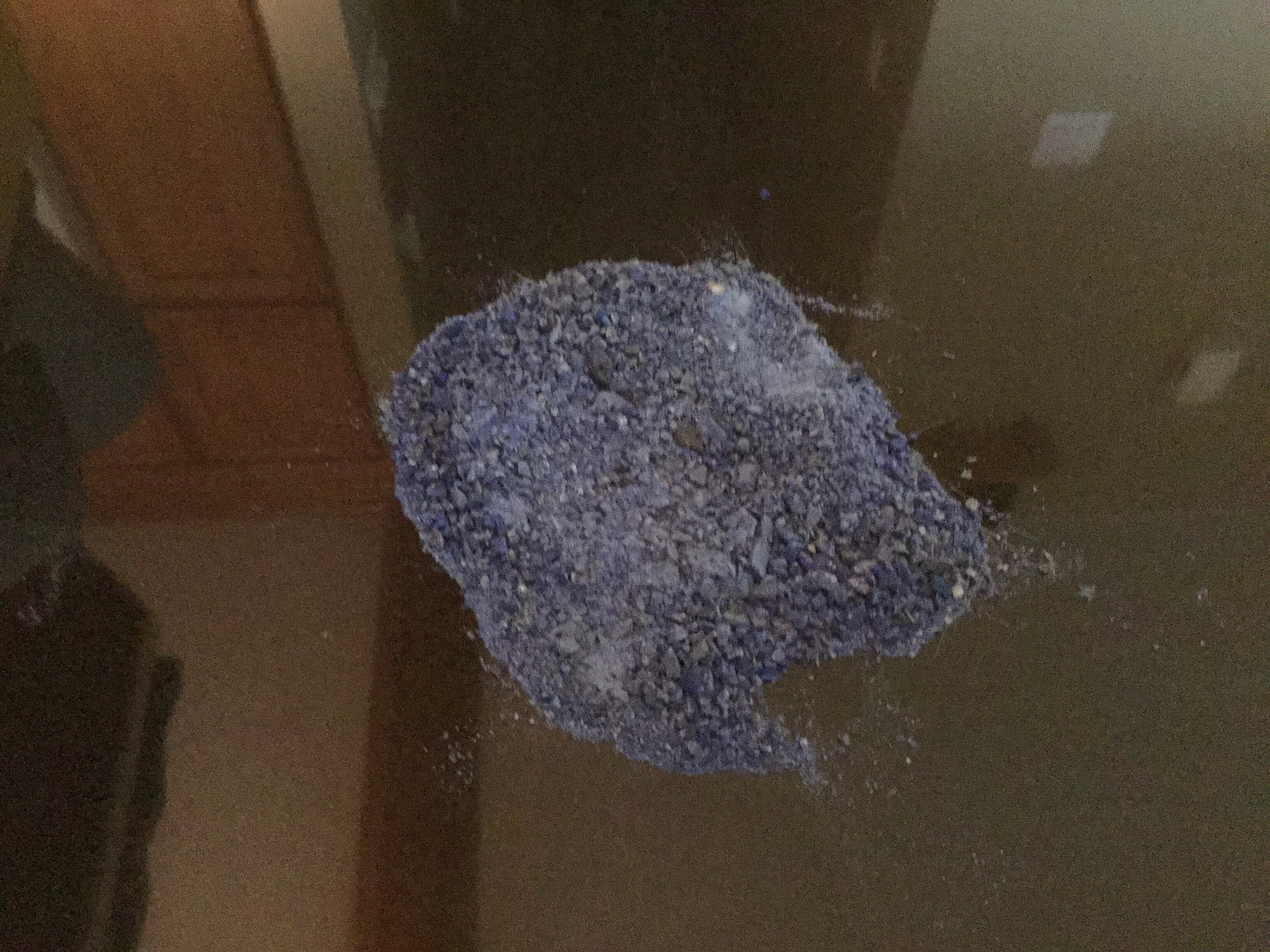 It was only once I had smashed all the beads that I learned lapis was not as simple to process as just a physical separation.  Lapis contains pyrite, sodalite, and more, and the only part we care to keep is the highly-pigmented lazurite.  Processing would involve rosin, beeswax, and gum mastic, at minimum, or other ingredients with rosin and beeswax.  Lucky for me, I have a strong allergy to rosin, both touch and breathing.  I also have allergies to some things on rubber/nitrile gloves.  Oh dear.

I decided to get started grinding, even if I wasn’t yet sure how I would do the separation.  To avoid having lapis dust everywhere, I ground the lapis with a granite stone in a metal mixing bowl, with about 1 cm of water in the bottom.  While grinding, the sulphur smell got even stronger, but was never overpowering. 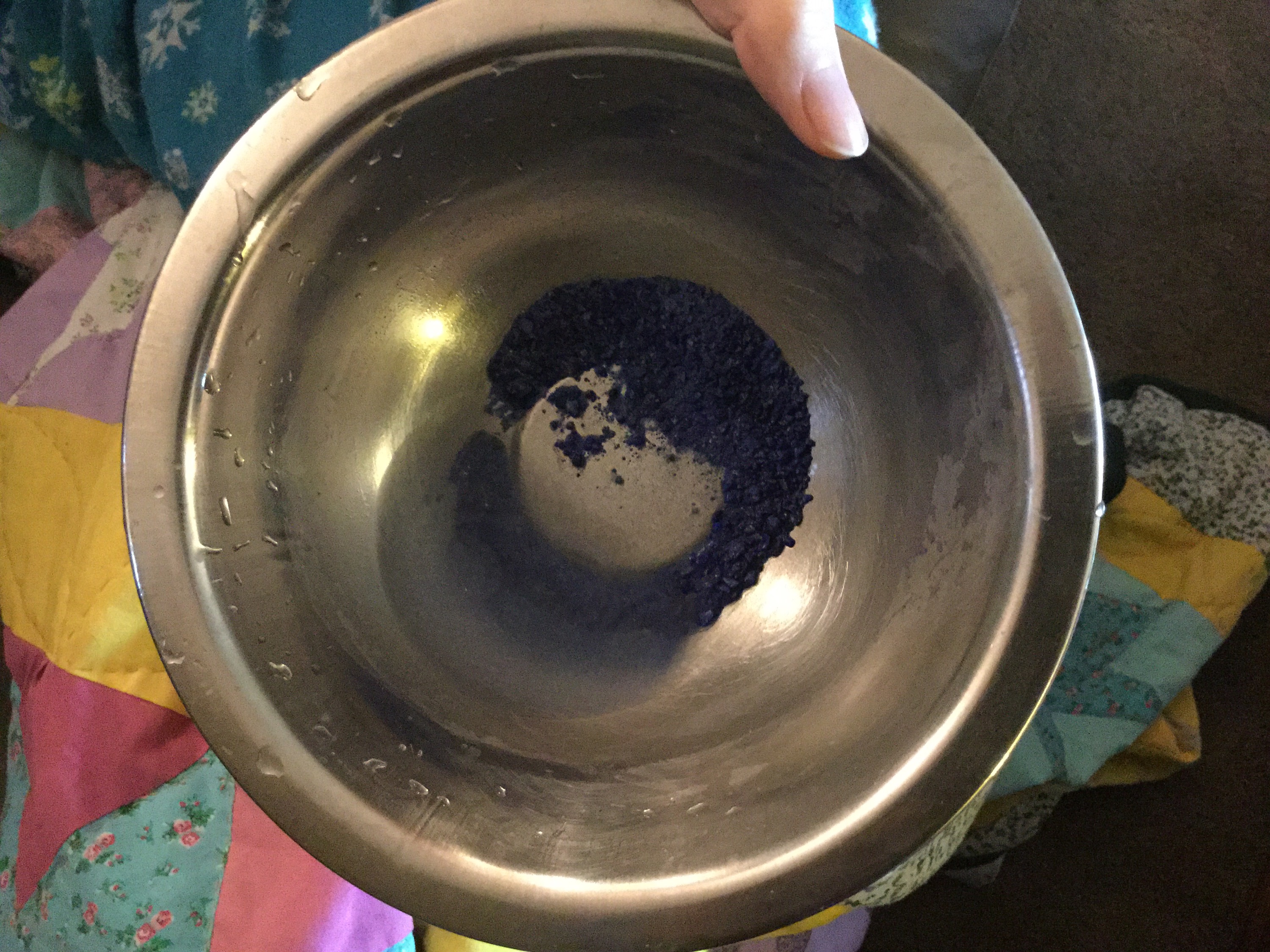 When the water got too saturated with floating pigment, I levigated and poured it off, a few times, and then began grinding again.  Levigating involves adding water, stirring, and allowing to sit for a minimum of ten seconds to allow coarser materials to settle out, leaving the fines in solution.  The fine particles can then be poured off with the water.  The larger, front bowl contained my first pour, and the smaller bowl at back contained my second and third pours, which contained slightly coarser material than the first pour.

Beside the bowls can be seen a magnet.  Hoping to find some other way to separate some of the pigment (because of my allergy), I tried to attract the dark iron pyrite with a magnet.  It somewhat worked.  Lots of dark scum attached itself to the two ends.  It left the mixtures much less grey, though still too grey for use. 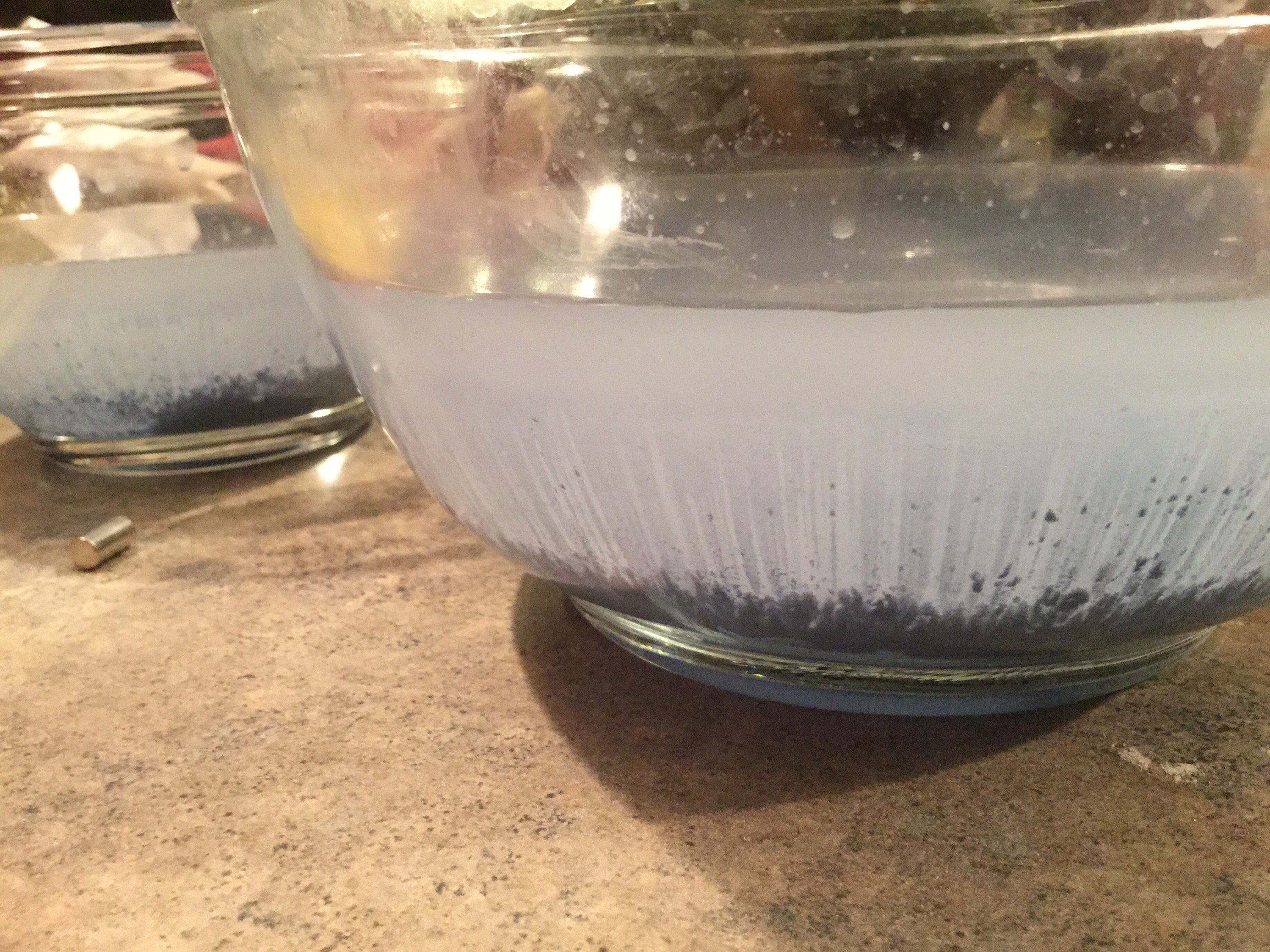 As I worked the lapis, the overall consistency got finer and finer, though there were still large pieces.  The bowl got nicely scratched, too. 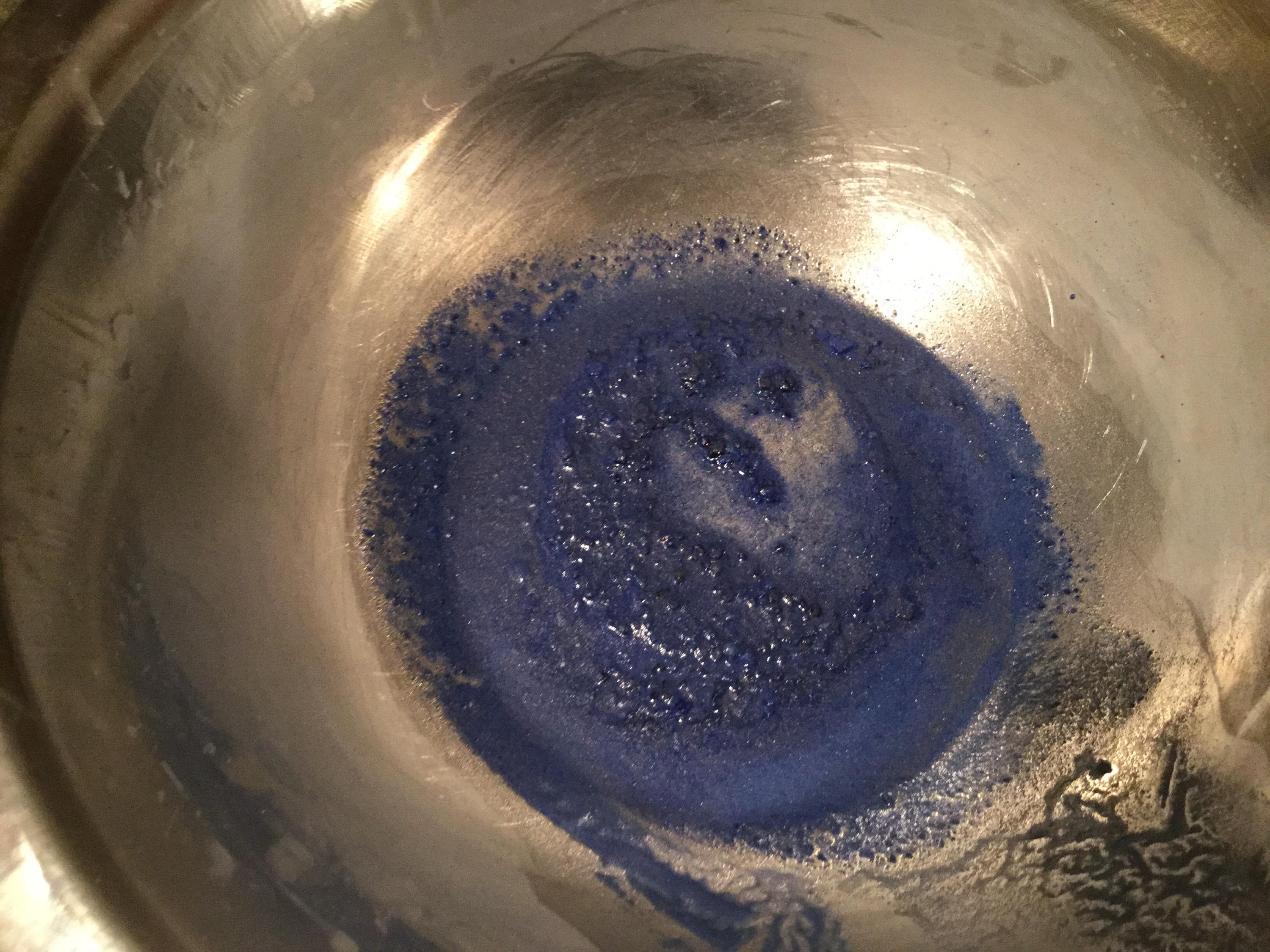